In this era of weekend jaunts to Paris, it is difficult to imagine conditions nearly two centuries ago when the pleasures of foreign travel were first extended to the middle class. With the development of the railroads, people began to go abroad in great numbers, visiting the ruins and statues long celebrated in the memoirs of the Grand Tour.

Back then, there were many travel memoirs, but few handbooks dispensing practical advice about hotels and routes. John Murray in London was the most important publisher of travel guidebooks in the early nineteenth century. In the 1820s, Murray’s guidebooks were seen by Karl Baedeker, a German publisher, who was inspired to issue his own series. The first Baedeker guidebooks were published in German and French, and covered Austria, Germany, and Switzerland.

The Baedeker firm prospered during the 19th century. After Karl Baedeker’s death in 1859, his son Fritz took over. Under his direction, English editions of the guidebooks were issued, and the scope of coverage increased to include remote destinations like Russia, Egypt, and the United States.Baedeker guidebooks are easily recognizable. They were published, beginning in 1854, in a red cloth binding, and they measure a compact 16 cm x 11 cm.

The text was printed in small type on thin paper, which was sometimes a source of criticism. One reviewer predicted that it would be difficult to read Palestine and Syria (1876) “on horseback in strong sunlight,” which was, after all, “as it must very often be read.” The cartography was another feature, with the typical volume including city plans, maps, and foldout panoramas of the Alps.

Baedekers are usually collected for their period charm, with the text as satisfying to read as many old novels. The phrasing is witty, so that in the Baedeker world, “prices generally have an upward tendency.” Italy was the subject of this pithy observation: “Persons in search of adventure and excitement will now miss many of the characteristic elements of former Italian travel.”

Then there are the quaint assumptions, like the month-long itinerary for a short tour of Switzerland—one of those plodding expeditions that were recommended for a “glimpse of the country.” 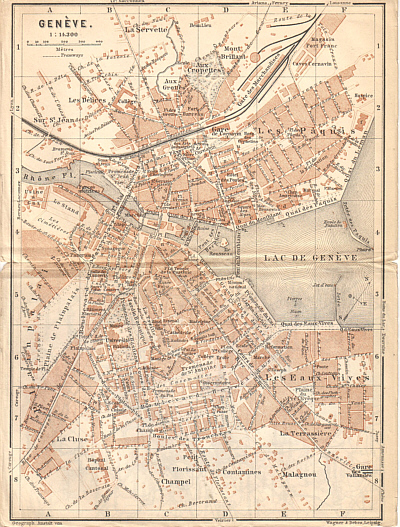 During the second half of the nineteenth century, “Baedeker” entered the traveler’s lexicon. Baedeker guidebooks were a byword for Teutonic thoroughness, and their accuracy made them into something of a joke among those who considered themselves above such earnest precision.

At the same time, “Baedeker” became a synonym for any sort of travel book. Occasionally, writers alluded to the Baedeker name in their own, unrelated works. As the title suggests, The New Baedeker: being Casual Notes of an Irresponsible Traveller (1910) was representative of the view that spontaneity was more important than planning. Such essays usually include portraits of innkeepers, funny stories about the natives, and literary anecdotes. In short, they are entertaining but, unlike the real Baedekers, they have no information about where to stay or what time the museums open.

The critics, however, did have a point. Baedeker guidebooks could be heavy handed. With their emphasis on history and art, they assume that travel was a serious matter. Much of the background information was written by specialists, and included the latest attributions and excavations.

It was something of a parlor game among reviewers to pick out the omissions and mistakes. The reviewer of Egypt (1878) regretted that “so little space has been allotted to the ancient and interesting Coptic churches of Old Cairo.” Baedeker’s guidebook to Greece was recommended by the Journal of Hellenic Studies even though at one ancient temple, some inscriptions “were in the peribolus, not inside the tholus, as is stated in the text.” Of course, no guidebook today would attempt to provide this depth of information.

Some of the most famous Baedeker references are found in E. M. Forester’s A Room with a View, which was published in 1908, and made into a movie by Merchant Ivory in 1985. In the novel, the heroine, Lucy Honeychurch, is touring Italy with her aunt, Charlotte Bartlett. In Florence, the two ladies stay at the Pensione Bertolini, where they meet the unconventional Mr. Emerson and his son George.

In the novel, “Baedeker” is a codeword for the pedantic site-seeing that Forester portrayed as typical of the English touring Italy. Early in the story, Lucy is shown studying Baedeker’s Handbook to Northern Italy and committing “to memory the most important dates of Florentine history.” Later, she meets an eccentric lady novelist who disapproves of such solemnity. She tells Lucy, “No, you are not, not to look at your Baedeker. We will simply drift.”

Guidebooks to Italy were some of the most popular and frequently revised. Prices for the early 20th-century editions of Northern Italy range from $50 to $100. Their contents throw light on the social life of tourists in Florence at the turn of the century. There are listings for church services, social clubs, and pensions, similar to the Pensione Bertolini. For those making a long stay, there was information about hiring a portrait painter or taking music lessons. Daytrips outside the city were also included. Fiesole, where Lucy was kissed by George Emerson, is described as a “town of no importance,” though the view was recommended with an asterisk.

Many of the most collectible Baedekers were published before World War I. During the war and in the years after, the Baedeker publishing house was the subject of anti-German feeling. One critic said it was unlikely that any traveler would seek out a postwar edition of the firm’s guidebooks to Northern France or Belgium and Holland. Indeed, there was a decline in the frequency of new English editions during the 1920s and ’30s. During World War II, “Baedeker raids” was the term for the German air raids on historically and culturally important towns in Great Britain.

Nonetheless, there were some collectible editions that were published during these years. A German-language guidebook to Madeira (1934) with a decorative printed cover sells for $1,200. Less expensive is the guidebook to Holland, that was published in 1927; a copy with a rare dust jacket is priced at $175.

The old Baedekers remain useful for anyone planning a trip, thanks to their detailed maps and historical background. They also have great vicarious value for those who want to skip the hassle of foreign travel and just stay home reading vintage guidebooks. Baedekers are a popular field for collectors of rare books and travel memorabilia. “What is great about collecting Baedekers is that you never have a complete set,” says Stefan Baer, the manager of The Complete Traveller Antiquarian Bookstore in New York, which has one of the biggest Baedeker inventories in the world. He estimates that more than 6,000 editions were published. For popular places like Switzerland, Paris, and London, prices start at under $100; they rise to $2,000 for places like Russia and Egypt. “You can enjoy your Baedeker collection before you’ve spent the first thousand dollars” he adds.

Amy Gale writes about antiques and collecting for many publications. She lives in New York City. Illustration courtesy of The Complete Traveller Antiquarian Bookstore.