Americana Continues to Outperform at Swann

Swann Auction Galleries’ September 27 auction of Printed & Manuscript Americana was the highest-earning Americana auction at the house in the last six years, bringing $1.2 million with 85% of lots selling. The day opened with a bustling auction room and active bidding during the morning session of The Harold Holzer Collection of Lincolniana was followed by an equally successful afternoon session. 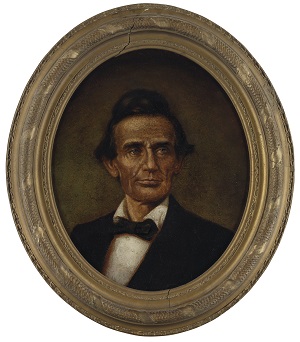 Top lots from the Holzer collection included a portrait of the beardless Lincoln, by John C. Wolfe, which brought in $40,000; a fourth edition of the famous “Wigwam Print,” the first stand-alone print of Lincoln, which sold for $21,250; and a commission of William O. Stoddard as secretary to the president signed by Lincoln, 1861, which brought a record $18,750 for a printed commission signed by the president.

The Lincolniana portion of the sale set several additional records, including one for any printing of the 16th president’s famous 1860 Cooper Union address at $5,000. Winfred Porter Truesdell’s important reference work, Engraved and Lithographed Portraits of Abraham Lincoln, 1933, brought $4,000; an Andrew Johnson impeachment trial ticket sold for $2,125; and Victor D. Brenner’s 1907 plaque, which served as the model for the Lincoln penny, fetched $4,500.

The sale did not slow down during the afternoon session: the top lot of the auction was Francis W. de Winton’s diary, containing notes on pow-wows with Indians during an official tour of western Canada, which sold for $65,000.

Among many institutional participants, William & Mary College was the successful bidder for a collection of letters by Louise E. Blackmar, a Methodist missionary in India, to her stateside siblings, 1873-82. The Society of the Cincinnati’s library was top bidder for a pair of letters by Charles McEvers describing unrest and British artillery fire in 1775.

Rick Stattler, Director of Printed & Manuscript Americana at Swann Galleries, said of the sale, “This was one of the most successful sales in the history of Swann’s book department. The Holzer collection finished above the high estimate in the morning session, and the afternoon session which brought $969,100, on its own merits, would have been an exceptional Americana auction.”  For more information call:(212) 254-4710, extension 27.