"With over an over 80% sell through rate, and with 16 of the top 17 lots selling to collectors, Swann Galleries’s Thursday, October 15, Rare & Important Travel Poster auction definitively showed that the market, and specifically private collectors, has remained robust and competitive,” noted Nicholas D. Lowry, Swann president and specialist for the annual sale. 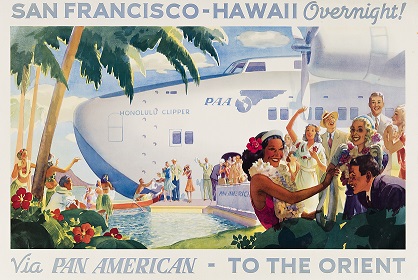 The auction resulted in two discoveries with Frank Lemen’s previously unattributed circa-1952 design for Bermuda, which sold for $1,000, and the unsigned The Palisades of the Hudson / New York Central Lines, circa 1930s, which earned $5,750 and was attributed to Anthony Hansen after research found the image in the New York Central Line’s 1931 calendar with Hansen’s name attached.

“Some speculate that the inability for people to travel given the pandemic has raised the profile of Travel Posters in particular, but I believe that material of exceptional quality and rarity will always be eagerly competed for. And with over 13 world record prices achieved, it appears that the market bears that theory out,” concluded Lowry.